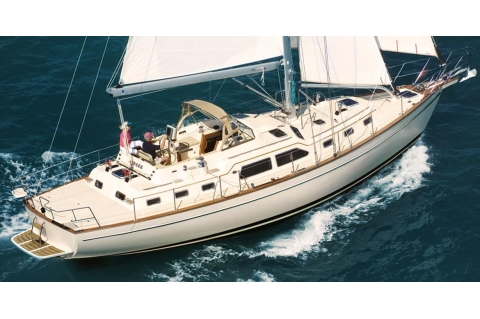 With the introduction of the new 495 aft-deck cutter, the 485 which has been produced since 2002 is officially retired. When many sailors think of Island Packet, they are thinking about this signature center cockpit design. Thats because having a center cockpit creates a larger stern stateroom. It also changes the deck layout for which many sailing couples feel more confident in handling this size yacht from a more forward position than a stern cockpit model. Instead of arguing about it, Island Packet made the decision to offer both the 490 as a stern cockpit and this 495 model at a center cockpit.

Having a center cockpit creates an even larger aft deck area that is great for sunbathing or storing your gear. Like the 490, the stern features a transom platform for easy stern boarding to the boat. Unlike other current yacht builders in this category, you will also find wide recessed sidedecks and foredeck with protective bulwarks instead of "toe rails."

While the deck and cockpit come from decades of refinement from offshore cruising experiences, the interior has also been worked and reworked to get the most out of the area. In fact, the 490/495 have many potential customization options to consider down below. The most significant being the decision to build a 2-stateroom or 3-stateroom cabin. You enter the cabin via angled companionway steps with direct and easy access to the gourmet galley. The center cockpit design affords a raised main salon with a wonderful panoramic view from seven fixed safety glass windows. Full length port and starboard setees double as berths when needed. The dining table folds up to provide more space when not in use.

Both staterooms of the 2-cabin layout feature island berths with privacy doors to passageways and ensuite heads that feature separate shower stalls. just forward of the aft stateroom is a nicely appointed navigation station that will make any world cruiser drool with envy!

You can use this tool to change your cookie settings. Otherwise, we’ll assume you’re OK to continue.

Some of the cookies we use are essential for the site to work.

To control third party cookies, you can also adjust your browser settings.

Information and Settings read less About our cookies
Top